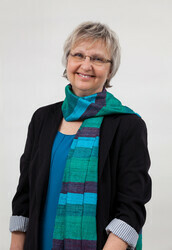 Alice Pallett is an award-winning Kelowna artist with a passion for innovation using traditional and contemporary materials and processes.  She loves fibre, such as wool and silk and the process of felt making, dyeing and painting.

She says about the process of wet felting: “Like magic, water and agitation transforms unspun wool into felt, a solid material that can be shaped to give substance to ideas. Felting takes time and hard physical labour. The reward is an intimate connection with the material.”

She holds a Diploma in Art and Design from Fort McMurray Community College and has studied visual art at the University of British Columbia Okanagan, at Red Deer College and with visual artist Donna Baspaly and fibre artists Marjolein Dallinga, Fiona Duthie, Rutsuko Sakata, Katia Mokoyeva, Lisa Klakulak, Melissa Arnold and others. She has experience teaching workshops as well as formal training in teaching adults.

The works of Hundertwasser, Paul Klee, Max Ernst, Joseph Beuys, the architecture of Antoni Gaudi, and Marc Chagall’s stained glass windows are among many who have influenced her work.  Music, nature and the city are a source of inspiration. Among the post-modern artists Luanne Martineau, a contemporary Canadian multimedia artist, inspires with her use of felt in her large scale, expressive installations.

She says about her recent fibre arts works: “I feel strongly about bringing traditional materials and processes, owned primarily by women, into the realm of the arts. Many fibre artists before me have challenged our perception of what we consider to be art versus craft. There is no legitimate answer to the question of what is art, but the discussion serves to challenge our beliefs and perceptions.“

Alice Pallett is a member of Art Felt Collaborative, an award-winning group of visual artists working in fibre. She is an active member of the Lake Country ArtWalk Committee and past treasurer for the Alternator Centre for Contemporary Art in Kelowna.

You can find her work at Lake Country ArtWalk or contact her via this site.